“It’s not about me as a brand, it’s about humanity”

Knowing how they did it, how Brunello Cucinelli became one of the most successful luxury brands in the world begins with understanding how to carve out a truly unique and sustainable advantage. In their case“it’s about humanity”.

Rising to become the leading cashmere maker on the market and one of the most desired luxury clothing brands, Brunello Cucinelli started in 1979 with little more than a bank loan, a friend, and a conviction. Influenced by his father’s demoralizing experience as a factory worker, Brunello was inspired to “find a new approach to work that endorses a man’s ethics, dignity and moral values”. A self-taught philosopher, he created an inimitable strategic advantage for his company, not from marketing, technology oroperations but from creating a “human” advantage.

The facts speak for themselves. From a single store in Porto Cervo, a resort town on the island of Sardinia (an autonomous region of Italy), the company has grown to 102 stores and 130 monobrand points of sales around the world. In a challenging market, the company continues to achieve outstanding performance with 2018 results with 553 million Euros of net revenues, 8.1% net revenues growth and an EBITDA growth of 8.8% (where EBITDA is 17.2% of sales).

Brunello Cucinelli declares, “it’s not about me as a brand, it’s about humanity”.Brunello places paramount importance on the essence of humanity stating; “Quality of life is essential. Work becomes more humane if man is placed at its center.” To deliver on this he went beyond favourable human resource policies and practices and invested in this philosophy in a major way by buying and restoring an entire town to provide his employees with an aspiring and inspiring lifestyle.  He has created a strategic competitive advantage through nurturing a human experience.

In the late 1980’s he bought a medieval hamlet Solomeo in Umbria and restored the town into an artisan factory village where employees live and work including Brunello himself. The town includes a thirteenth-century castle, church, medieval houses, farmhouse and villa. Old buildings have been transformed into artisan workshops, warehouses, dining areas, town squares and an outdoor theatre, each with a plaque containing a philosophical maxim.

Being Human with the Employee

Brunello built what he calls a “humanistic factory” where“employees are treated as preciously as the clothes they create”. With an emphasis on craftsmanship, creativity, pride in one’s work and perfection, there is no traditional hierarchy and no distinction between management and non-management. Employees earn higher than average wages, do not punch time cards and each employee has a key to the workplace.

He really means it when he contends that it is imperative to have a mutual respect for one’s peers; “I meet with all of the employees often to talk about how the company is doing, the profits, my ideas, the stores we are opening. I share everything with them.”

He also really means it when he says, “quality of life is essential”. Employees enjoy cultural and social activities including lectures on art, philosophy, architecture and concerts performed in the concert hall he has built for them. Reciting, “Alexander the Great drank the same water as his soldiers and Julius Caesar slept in the same bed as his”, Brunello sits along side his employees to enjoy everyday a 90 minute three course lunch, with wine, for the company subsidized price of 2.80 euros. The food is prepared from Brunello Cucinelli’s own gardens and olive groves where he grows produce exclusive for the consumption and enjoyment of the employees and not sold to the public.

Being Human with the Customer

Brunello follows an idiosyncratic business philosophy that includes various influences from Renaissance humanism, Senecan stoicism Benedictinerigour and the theories of Theodore Levitt, a twentieth-century marketing scholar who argued that the purpose of companies is to keep and serve customers”. Brunello’s philosophy governs the way he does business noting, “I would like to make a profit using ethics, dignity and morals”. He does not want to make anything that you throw out. He proclaims, “Selling luxury goods is also about selling a way of life”.

For Brunello being human goes beyond the artisanship and lifestyle of luxury to include customer accountability and service. He states, “The fundamental principal is that the client comes before profit.” Considering minimum orders insulting to clients, he has no minimum orders. Religious about on-time delivery, he’ll ship a reorder of even a single sweater overnight at no extra cost. Brunello’s perspective is“it is more palatable for a client to know that he can buy only 20 sweaters. He is more inclined to dare.”

Being Human with the Community

In his autobiography he writes, “On the one hand the riches of plunder, those of the man who steals and hoards: on the other hand the good riches of the man who transforms and distributes, and by so doing, renews life”, this is what Solomeo represents for me.”

With this maxim in mind, Brunello says, “it’s important to take a profit”¦also the profit must go to the workers to give their work dignity and lastly, profit must go towards the local community whether that be a hospital, theater or monastery”.As with every philosophy Brunello espouses, he demonstrates his commitment through real and significant investment. Twenty per cent of the company’s annual profits are set aside for restoring the village, Solomeo, to create an environment where his employees are “offered something more” where they work and live.

To expand and develop his humanist objectives and ideas, he recently established the Brunello Cucinelli Foundation. The foundation aims to have a direct influence on human values, understood as being the relationship between people and various activities in society. One example is the academy and library he has built where classes are offered to young people wishing to learn artisan trades. The goal of the academy is to honour the merit of people and promote projects to raise the awareness of human values. There are four schools including art, religion, enterprise and science.

So What Is Your Advantage?

As a way to uncover a sustainable strategic advantage unique to your company, our Mobilizing Strategy Results Solution Module uses an analytics tool called VRIO, developed by Jay B Barney in his book Gaining and Sustaining Competitive Advantage. According to Jay B Barney and the VRIO model, the basis for a sustainable strategic advantage is something you do that is; V – valuable to someone, R – rare and not readily available from competitors, I – inimitable and hard to replicate and O – organized by your company to proficiently deliver.

Many of the attributes most companies base their strategy and competitive positioning on; be it a product advantage, pricing advantage, technology advantage, talent advantage do not pass the VRIO test. Brunello Cucinelli’s humanist advantage is a masterful example of a highly insightful sustainable advantage. We can copy product quality, we can copy pricing, we can copy technology, we can even hire comparable talent. We can’t easily replicate the devotion to clients, artisanship and perfection Brunello Cucinelli has created. As Brunello says, “When it is true luxury, you feel like they have it in their soul and heart.”

To learn more about how to design a strategic advantage, check out our Mobilizing Strategy Results Solution Moduleor Contact Us.

By Blair Severn and Marlene Bonigut of enabling ideas®. Research by Heather Wilson of Information Solutions, Rotman School of Management, University of Toronto.

7    One Hundred and One Beautiful Towns in Italy, by Lazzarin Paolo, New York: Rizzoli (2004)

9    The prince of Solomeo: the cashmere utopia of Brunello Cucinello, by Mead Rebecca, New Yorker (March 29, 2010) 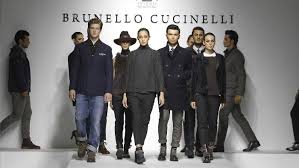